Welcome to the Oasis 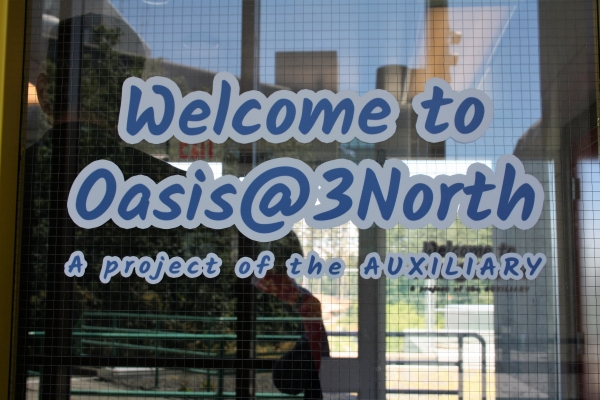 Oasis@3North:  A project of the AUXILIARY

The idea was to finish the rooftop at 3North was first mentioned to the Auxiliary Board in the fall of 2015 by the Site Manager Deborah Cracknell.  By June 2016 the Oasis was officially opened.

A place for patients, visitors, volunteers, and staff to decompress, pace, chat, eat lunch, the Oasis is open to all during daylight hours.

The rooftop had been ignored by all, except staff in the know, who saw the potential and brought out pillows and deck chairs of their own.

The challenge was -- could the Auxiliary turn this into anything?

A recommendation from the indoor plant person who looks after the Auxiliary plants in the cafeteria, put us on to a landscaper, Michael Cowan of Edibella Organic Landscapes.  He made a couple of trips gratis to look the site over and his positive comments encouraged us to take on this project.

The Auxiliary usually raises funds through the shop, Poinsettias for Patients, and other projects to buy medical equipment.  But not only medical equipment; it provided all the concourse furniture, installed benches outside the front door, and put plants in the cafeteria.  Some members felt the Oasis project was a bit outside our purview, but there were no opposition votes in the end.

Forming the inevitable committee, making an initial general plan, hiring a contractor, finding money, and the constraints of working at the hospital were the top items to deal with.

The Board decided to make itself the Oasis Committee, plus some other members with special interests and talents.

The general idea was trees and shrubs, picnic tables, and a pergola, so our webmaster Jeff Hayes created a fantasy oasis image for our publicity.

The major landscape contractors were asked if they wanted to be involved and some showed interest, but, in the end, Edibella was the last man standing.

Money, money, money.  The members agreed to spend up to $50,000, about a quarter of the usual amount spent by the Auxiliary each year on the hospital.  Realizing that the need for more money to fulfil our basic dream, the Auxiliary solicited donations.  As a charitable society, donations are eligible for tax receipts.  Some people sent cheques, others donated on our website, and others through CanadaHelps.  The biggest single donor, besides us, was Quality Foods, who were just opening a store in Eagle Creek Village, a new shopping/residential/professional centre right across the street from the hospital.  Many of the tenants at Eagle Creek followed suit and Auxiliary members spent many hours explaining the Oasis to customers at Cobs Bread and Subway and others.  That was money coming in.

Money going out was a different item altogether.  The regulations are very complicated for anyone working inside a hospital, basically a government installation.  It took weeks to finalize the scope of the project so that Edibella could make a living and we could get what we needed.  We had to figure out who would order the furniture, the planters, the pergola and where the invoice would go.  In the end, of course, the Auxiliary gets to write the cheques (not to the suppliers or employees, but to Island Health).

Details with lots of devils

What will it be named?  The Auxiliary had been using the word “oasis” from the start, since it seemed convey to purpose of the site.  But shouldn’t the Auxiliary get some credit?  It took about month with lots of input and nudging and editing to come up with a name which had three things – the word “oasis”, its location, and the word “Auxiliary” in it.  Then it took another four months for it to wend its way through government bureaucracy and get the stamp of approval, making VGH one of the few auxiliaries with such an honour.

How do we keep those working in and visiting the hospital aware and enthused?  Consultation with the Victoria Hospitals Foundation resulted in our creating a huge decal to go on a wall in the concourse.  And that led to the signage in various places on site.  Garside Signs do the signs for the hospital and they did them for a very generous price and then installed the big ones too.

The official opening had been scheduled for months:  the day of the Auxiliary Annual Meeting, June 21st, 2016  Hoping to have the Lieutenant Governor cut the ribbon, the Auxiliary sent an invitation....but there was an error in the date.  When that got straightened out, the Hon. Judith Guichon did attend.  Arranging the opening ceremony was more stressful and had more moving parts than the whole project.  Budget limitations dictated a small-ish group.  Also this was just another part of the AGM, not a big celebration.  So Howard Smith tried his best to send out invitations, invitations which made it clear that they were personal invitations and whole departments or others could not really be accommodated.  So we invited all our members, of course; the Site Manager, head of the hospital, the Works people who were involved at every step, some Island Health brass and the executive of the IH Board.  It was dancing in the dark.

The day dawned sunny and warm.  The business part of the AGM went off without a hitch.  Member Bryan Merryfield got the tent donated from Jeune Brothers and erected it.  Seconds before the arrival of the LG, a Medevac plunked down on the helipad just adjacent, and the opening began.

While Island Health argue about protocol and guests lists and who should have cut the ribbon, the Auxiliary proudly presents the Oasis.

The remaining budget will add another pergola – already there are comments about the heat!  We've added another smaller pergola with benches and greenery.  Some staff members collected to commemorate a late colleague, Kim Kempson, with a planter to deal with the ugly view right outside the door.  Then the Auxiliary gave ownership to Island Health.